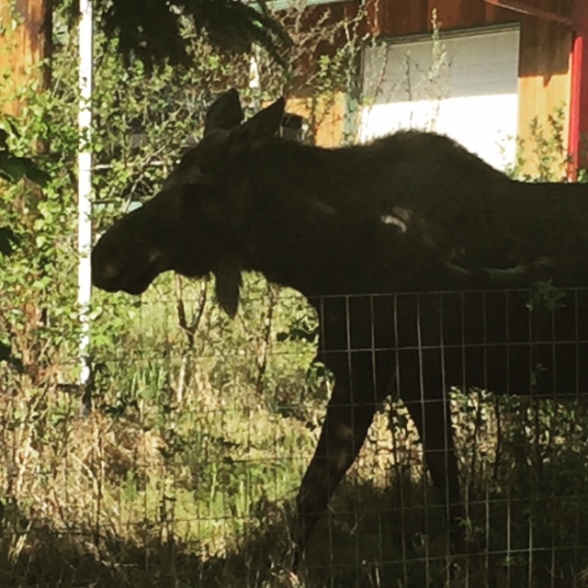 You’ve found your way to post #7 of my series of articles on the Urban Alaskan, written for my non-Alaska friends, where I talk about how my day to day experience is exactly like yours, mostly, except for the moose and timezone. You can catch up here.

I bet you think that because I work for Department of Fish & Game that I know everything there is to know about Moose. Well, that’s absolutely not true. I know about databases, we have biologists for moose. The few incontrovertible facts I know about moose can be summed into the following bullet points:

However, just because that’s about all I know about moose, doesn’t mean I can’t bang on about what moose mean for the Urban Alaskan.

Living in urban Alaska does mean wildlife encounters. If you live here long enough, you will absolutely have encountered moose and bear, even if the biggest hike you take is a quick loop around the dog-park lake. Before I get too far into this, I also want to point out that Alaska urban life also means loads of things we haven’t got to worry about (read: we have stuff to worry about, you have stuff to worry about), ticks aren’t generally an issue, snakes don’t live here, spiders are always small enough to be squashed and none are poisonous, neither fleas nor cockroaches are a major issue. There are no fire ants in Alaska, we don’t have anything like scorpions, and even the frogs tend to be these cute little things about the size of my thumb. Opossums, skunks, and Raccoons are the realm of fairy-tale creatures and the biggest wild cat we have is the lynx, which you’d be hard-pressed to see even when looking. Of course, there are exceptions to all of this, but this is how I see it as an urban dweller. My point, again, is that we have our wildlife and you have yours, right?

Have you ever seen that early 90s TV show Northern Exposure? The opening credits have a moose wandering though town, and while I never really watched it myself, I’d call that scene more or less accurate. Moose do just sort of strut around like they own the place. They’re giant Pleistocene hold-outs consisting of 50% legs, 50% hamburger, and 50% “don’t give a shit,” that still seem to remember when people were pretty new on the North American scene.

I think I could sum up living around moose in a few statements:

“That bloody bastard just broke my apple tree in half!”

“There’s a moose in the driveway and I can’t leave for work.”

“Koster! A moose hit my car this morning. I was stopped at the light and it came charging out of the woods and ran right into my quarter panel.”

Most suburban dwellers around the country are familiar with deer furtively emerging from the woods to chew on the tender grass or fallen apples or some such. Those encounters typically involve hushed voices and “oh, look, it’s a deer.” Then, the deer will scamper off and do whatever it is deer do under the cover of the forest. Possibly smoke and drink. I don’t know, I’m not a deer.

With Moose, this simply doesn’t happen. If they were smoking and drinking, you’d better believe they’d do it right there in front of you. In fact, you could stand on your front porch banging pots and pans and shouting at the top of your lungs and the best you might get is a sour look from the moose and a sore throat from shouting.

If you’re very lucky, the moose will carry on licking the salt from your car or decimating your prize apple trees. If not, well, you’ll be tramped into an unpleasant jelly-like stain.

While a lot of noise is made about bears, because they’re big and strong and sometimes maul people, human-moose interactions are way more common and plenty dangerous. Plus a moose will absolutely maul the shit out of your car. The Alaska Department of Fish and Game reports that nearly 800 moose are killed in motor-vehicle accidents every year on urban Alaskan roadways. That may not seem like a tremendous amount from the perspective of a state this size, after all, deer are hit all the time in the lower 48, aren’t they? Not the same, friend, not the same at all. Hitting a moose is the same as hitting 7-8 deer all at the same time. While getting hit by a car is a death sentence for a moose, it is also an alarmingly frequent death sentence for the car.

I’m sure at this point, you might be asking yourself. Wow. A thousand pound animal gets hit by a car. Seems like an awful waste of perfectly good meat, that… No? Not thinking that? That’s because you’re not from here. The thing is that if you hit a moose with your car, by law, the moose meat doesn’t belong to you. It’s property of the state, and the state gives the meat to charities. Wow – great idea eh? Yes, it is and to add a cherry on top charities in this state also include family groups of 4 or more families. So, it comes around to this: If you want to eat roadkill, then you better round up some friends and call the Alaska State Troopers to get on the damn list.

And one last fun anecdote before I leave you without a conclusion to satisfactorily sum up how living here with moose is exactly like living anywhere else without them. I was on the list with some friends a few years back. So, one week, when my wife was out of town with our youngest son and I was at home with the older kids, I was woken up at 4am. I checked the caller-ID. Alaska State Troopers. You ever had a GOOD call from the state troopers at 4am? No, me either. Well, until that day. Turns out someone had hit a moose and it was our group’s turn. After a full day of butchering with friends at the kitchen table, we had a freezer full of moose.

The whole point of this post is to describe the realities of living with moose, which do suck and all urban Alaskans can commiserate with the story of being trapped inside the house by a moose who refuses to leave. However, if you’re cautious and respect the animals, they’ll generally leave you alone and it winds up being a fun little thing to watch them stomp through the yard onto better munching grounds. It’s really a lot like watching the deer down south, but with plenty of time to take a good picture. 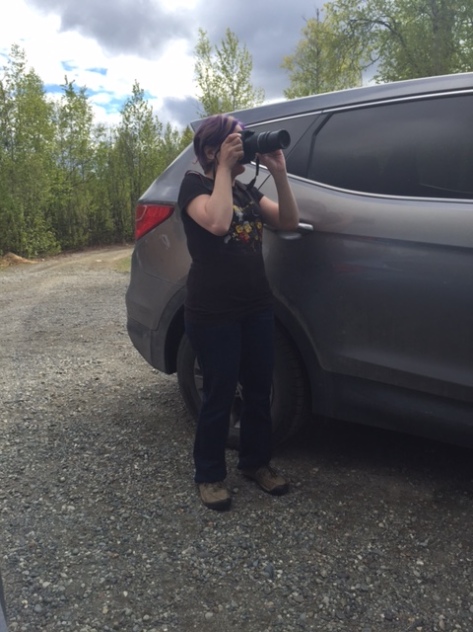