[Updated 07/29/2021 – I was in the shower this morning thinking about work and life and school and all that and I remembered this series, and how it just sort of died. I thought I’d revist it and break from the grad-school posts, at least for a minute.]

Some time ago, as I crawled out of bed and rummaged through my social media notifications from friends in more civilized timezones, I tossed out the idea of a blog about the urban Alaskan experience. This was followed immediately by positive reception and encouragement to consider a series of posts. So, here I am. These blog essays are going to be relatively short and focused on one general topic. As I proceed through my stories of the Urban AK experience, if anyone has a story to share, I’ll post it in the series.

To answer the question in the title of this post: I live in Alaska because this is where I grew up. While I wasn’t born here, this is home. From my earliest memories until I was about ten, I lived in Anchorage then we moved to Wasilla. My college years were spent in Fairbanks with a couple summers in Seward. After college my wife and I moved to Maryland for a year then we were back to Seward, then Anchorage and finally Wasilla, in the home we’ve lived in since.

As with many white urban Alaskans around my age, I wasn’t born here. I was born in Georgia to parents from Ohio and Minnesota. We came up when I was around 1. As you could imagine, I don’t have any memory of that time. I consider my year long adventure in Maryland the only time I’ve lived out of state. While I’m about to go on in a whole pile of posts about how much urban Alaska is just like everywhere else, I’d be lying if I tried to tell you moving from Fairbanks, AK to Ellicott City, MD wasn’t a shock to the system. I can’t exactly put my finger on it, but there is a real, tangible difference between east and west coast culture.

The truth of it is that I had a great job in Maryland. It was super interesting, paid well, and had excellent prospects for advancement. Really, it was exactly the kind of place you go off to have a career. After about 9 months or so, it became clear that the bustling ocean of humanity and unfamiliar pace of life weren’t a good fit for us. This wasn’t really an overnight realization, it settled on us slowly until it wasn’t deniable anymore. We started looking around us and peering uncomfortably into the future in that lazy manner twenty-somethings do. You know – the future is a place we’d have to go at some point, but not just yet, so let’s not think about it too hard. Those small forays into “what do you think the future holds” made us realized that life was going to be completely unlike either of our childhoods. We weren’t going to have a cute little house with a creek out back and maybe some chickens and things. Living in Maryland meant we’d be crammed into a row-house, neighbors stacked so tightly on either side that we might as well be dried, salted, and packed in oil.

It wasn’t until we went back to Alaska for a couple of weeks that it became abundantly clear that that happiness wasn’t going to come from work alone (a life-lesson I’ve got to re-teach myself every few years). We were also going to have to be happy with where we were. So, we made a plan, packed all of our things into our Subaru and a little trailer and scuttled back up the highway. Neither of us had a job, our savings amounted to just enough to get us through a month, and yet off we went.

After a challenging few months, we found good jobs, then a bit later a nice little house with the creek and eventually chickens. Really, we could have gone anywhere to find this. Even in Maryland, had we really really looked, made some concessions, and developed a plan, we’d have found something similar. Really, the pull to home was strong and so here we are, and hopefully, here we stay. 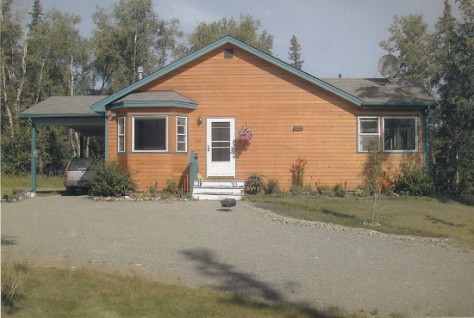 Next up: What’s it like to live in Alaska?

5 thoughts on “Being an Urban Alaskan #1 – Why the hell do you live in Alaska?”