Short answer? Bethel, AK for work. To be a lot more specific, I’ve worked for the Alaska Department of Fish and Game (ADF&G) for about 12 out of the the past 13 years. For all practical purposes, this has been my entire professional career. Unlike the vast majority of other Fish and Gamers, I’ve haven’t spent any of my time working in the field or remote places in AK. I’m one of the few who has the honor of holding down a chair at a desk to make sure all of that great info we collect is analyzed for various uses.

This past week, I finally made it to one of the more remote corners of the state. It’s not field work, but Bethel is probably as close as I’ll ever get. Bethel is an interesting place, it’s a town of about 6,400 people along the Kuskokwim River in western Alaska. It’s some 500 miles off the highway system and accessible by plane and barge. If you’ve never been to rural Alaska, I can say that it’s very likely it’s like no place you’ve ever been. To put this in terms my lower-48 friends might understand, Bethel is a lot like a developing foreign country. You’re as likely to hear the word “Quyana” as you are “Thank You” and you are aware very quickly that while this is Alaska, it’s not Anchorage. 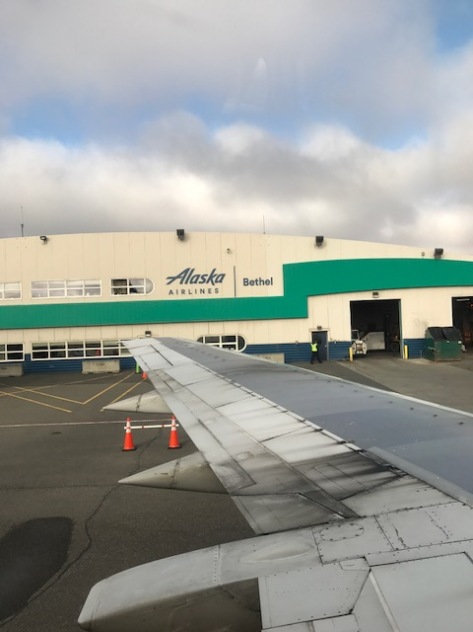 The truth is that I want this post to be about a lot of things, the lack of internet access being notable, anyhow I thought a lot of things while I was there, but nobody wants to read a sixty page treatise on what Dave thought of Bethel, AK. So, instead, I’m going to give you a couple of anecdotes that sum up my experience.

To be clear, I went there to work, and work we did. The average day was something like 10 hours. That was good and productive, but not interesting to anyone not involved. Perhaps it’s odd, but after having gone and returned, I feel a hell of a lot more motivated than I did before leaving. Not sure how ten hour work days for a week without my family can accomplish that, but it did.

The first thing that happened actually started while I was getting on the plane headed out, and as I sat on the plane. I happened to be just behind a young woman, probably in her early twenties who fit the description of soy pumpkin-spice ‘basic’. She repeatedly, and loudly, announced to anyone who made eye-contact that she was from Oregon, was going to move to Bethel to be an accountant to be with her boyfriend who was a dentist. She repeated this so many times I think it may very well be burned into my permanent memory. After getting off the plane I found my colleague waiting to pick me up. We stood, as it happens, behind this young woman for about twenty minutes waiting for my bag. While we waited and chatted about writing, the survey project, and whatever, the young woman and her boyfriend were rapidly becoming entwined in a situation that was going to require a bedroom very, very soon.

So, we got my things and hopped into the work truck. As soon as I closed the door, I let out a breath and unloaded with young lady’s story. In part because it cracked me up and in part because this is the sort of shit I like to write about. My colleague’s response amounted to a shake of the head and something between amusement and exasperation along with “Bethel is going to rock that girl’s world, and not in the best way.”

By all accounts, Bethel is a rough town, but it didn’t strike me as a bad place, just incredibly real with real problems, and about as NOT Oregon as you can get. You’re not going to find Starbucks out there. The best place for coffee was actually a little safety shop in the hospital administration building, and it was, indeed, a good cup of coffee.

The other little story was my trip to the tundra. On night two, my colleague took her dogs out to burn some energy and let me tag along (and also made sure I didn’t freeze to death out there – if you happen to read this, thank you, that hat made all the difference, even if a bit girly). We walked maybe a half mile out and back. It was amazing. You can see the bones of the land out there in a way you can’t elsewhere, except perhaps a desert. But unlike the open hostility of a desert, this place was slightly more conciliatory. While the wind roared icy threats at us, the ground cover included all types of berries in impressive quantities. It felt a bit like an apology for all the unpleasant weather.

In any case, as we walked back to the truck, we got to talking about living and working in Alaska. I don’t quite recall the flow of that discussion but it landed more or less like this: “Here we are, taking an evening walk across an absolutely gorgeous landscape that some people would consider a once in a lifetime trip they might never get to take, and we’re being paid for it.” Not paid to be walking, of course, but we were paid to travel out there and work, and really, who gets to go to a place like this (picture below) and be paid to be there? Okay, we’re not unique, but holy moly…

4 thoughts on “Where the hell you been, mate?”