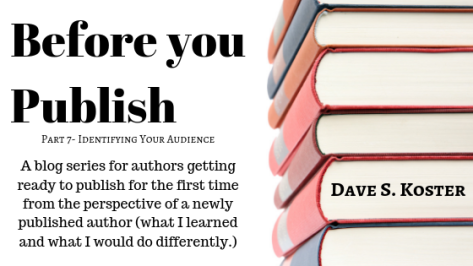 I want to preface this post by saying that I don’t claim to be an expert. The advice and recommendations below are based on what I’ve experienced in my journey and what I would do if I were to start over – or at least do for my next book.

In the initial post to this series, I had a few questions in my checklist that involved knowing your audience. There is a whole pile of reasons this is important. Most writers are going to say ‘Well, duh.’ Really before saying that, we should make sure we fully understand why the hell we should care. I got an agent review for The Dark Queen of Darkness, where I was asked: What’s the audience for this book. My response: I don’t know. What I should have said was: young adult, appealing more toward the female end. I didn’t know/accept this until after I was crushed by his hyper-critical review. What this experience taught me was that knowing your audience is relevant no matter how you hope to be published. Now that I’ve committed to self-publishing, knowing exactly who I am trying to tell stories to is a critical piece of the puzzle.

The reason you need to know your audience is advertising. As I said in an earlier post, you’re going to be responsible right down to the most nuanced aspect of publishing. You’re going to waste money on advertising if you don’t know who to target. If you’re paying Amazon, you only need to know about your book and similar work. If you’re using Facebook, knowing sex and age-group is going to help you even further because you can target readers based on demographics as well. This might not seem like much of an advantage, but recall the whole point of marketing is reaching readers who are most likely to want to read books like yours.

From everything I’ve learned to this point, publishing is all about volume. When you make two dollars on a book, you’ve made two dollars and found one reader, but at this point, you’ve likely spent at least a few hundred dollars getting it all together, not including your time to actually write the book. To get to the break-even point, you’ve got to find hundreds of readers –Thousands if you want to move into making money. You can’t do that without effective targeting.

As I’ve been saying throughout, I’m brand new at this, and all of this is what I can see for having dipped my toe into advertising. I’ve spent a couple hundred dollars on Amazon and Facebook. The reach has been good, but the clicks poor and purchases non-existant. For every 5 or 6 thousand impressions, I’ve gotten 1 click through and 0 purchases. This tells me I’ve got a few potential problems. The first is that my blurb, cover, and hook aren’t working. The second is that nobody actually wants to read the book, the third is that I’m not actually getting this work in front of the most likely readers. Either way, it’s hard to spend that kind of money to have absolutely no return on investment.

In my experience so far, the best way a new indie author can work out their target audience is beta-readers. If you get ten or fifteen people to read your book from different backgrounds and perspectives, you’re going to start noticing patterns among the people who read and liked your work and those who didn’t. Those perspectives will give you the necessary demographic clues you need to successfully target your advertising dollars.

All that said, if you’re writing in a specific genre, it might be that you already know your audience. Romance writers, for example, seem to have reasonably well-defined categories and target audiences. To start, it’s probably the largest segment of the publishing industry with a lot of very avid readers hungry for new material. Of course, it also appears to be incredibly competitive. One of the most expensive Amazon key-words I’ve run across so far is “Paranormal Romance.” This will cost you $2.00+ per click. If you’re like me, however, and you write satire that follows in the footsteps of Christopher Moore, Douglas Adams, and Terry Pratchett, identifying your audience is a hell of a lot harder. I’m too inexperienced to know just how to get this in front of potential readers. In any case, using your beta-readers for this kind of insight should help.

This is where reading a lot of other work or searching for other books similar to yours and reading those comes in handy. You can absolutely use other people’s work as a guide to finding your audience. If you’ve written a book similar to another, you’re going to want to try to get in the “If you like this title, you’ll probably like this title…” list in Amazon. This is super hard to do if you’re not exactly sure what your book is like or have a limited perspective. I’d hazard a guess to say most indie authors don’t have this issue and avidly read what they are writing. I’m afraid I’m one of those people who wrote a book that appeals to me but without spending a lot of time up-front reading similar books. I’m looking at Wine Bottles and Broomsticks from a slightly different perspective than most readers, and now that I’m actually trying to sell copies, I see the problem pretty clearly.

So, once again, I’m giving advice from a thoroughly inexperienced lense, but this has been my initial impression, within just a month of advertising. If I were to start over, I’d have spent a lot more time with both beta-readers and in researching similar books from several different angles. Had I done this, targeting would be going much easier, and I wouldn’t be wasting hundreds of dollars on advertising with absolutely no return on investment.

What’s your experience been with targeting your audience? Do you think Beta-readers are helpful there? Have you written something that doesn’t fit your usual patterns of reading? Leave me a comment.

One thought on “Before you publish, Part 7 – Identifying your audience”