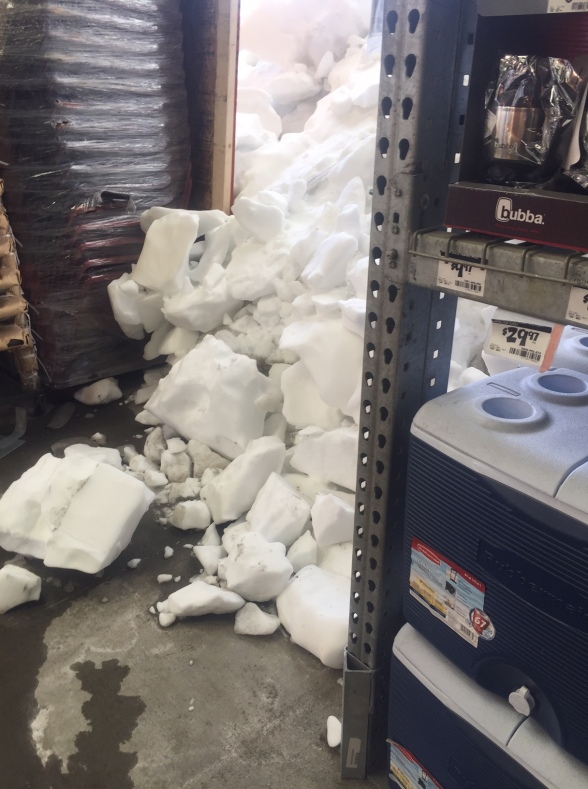 [Updated August 2021] – You’ve found your way to post #3 of my series of articles on the Urban Alaskan, written for my non-Alaska friends, where I talk about how my day to day experience is exactly like yours, mostly, except for the moose and time zone, you can get to the last post here.

I’ve tried writing a response to this question no fewer than three times. Given that the question is really code for: “Is the winter really as long, cold, and harsh as we’ve all been led to believe and is the summer that bad too?” or sometimes “Do y’all live in igloos?”. You’d think I’d be able to tackle this one easily. After all, I’m trying to debunk notions that Alaska is this mystical realm where only the burliest of men and hardiest of women live. Unfortunately, regardless of where you live in Alaska, you’re likely to be subject to some pretty gnarly weather at least a few times a year. Where I live, the best description I can give our average weather day is: Mostly tepid. Summer of 2021, for example, has been mostly 62 and raining. However, because Alaska is BLOODY HUGE – a quick geography discussion before I can carry on.

Anchorage is at latitude 61°13′N, which is very close to that of Lillehammer Norway, and interestingly, further north than Whitehorse, Yukon Territory, which is super cold and sort of the geographical epicenter of anything written by Jack London. I’ve always reckoned Whitehorse to be much further north because its climate is more like that to Fairbanks, AK. Fairbanks doesn’t have a well-known comparison, perhaps Reykjavík, Iceland is the closest well known place? Also, Fairbanks is further south than Tromsø Norway. Juneau, our state capital, and a place I’ve never lived, sits in a coastal rain forest at a latitude roughly halfway between that of Inverness, Scotland and Stockholm Sweden. And just to really nail the point home, Sitka, AK sits at roughly the same latitude as Aberdeen Scotland, and our southern & western most community, Adak with a windblown tundra-dwelling population of some 230 in the middle of the Bering sea sits at about the same latitude as Oxford, England. There, now you know some things that probably confirm your opinion that Alaska is a windblown ice-land. For those who need such things, citations on latitudes.

I can only speak to the Anchorage/Mat-Su and Fairbanks areas, as these are the only places I’ve lived, and as this is about the urban Alaskan experience, hopefully you can forgive me for mostly sticking to these. As far as I’m concerned, we have two Seasons. Summer and Winter. Fall and Spring are short-lived affairs lasting no more than a couple of weeks, although we’ve been known to have protracted spring or fall times. That said, when the leaves go, they go fast and when they come, it goes from just a green halo to full foliage on all of the native trees about as fast. Except for those very short transition periods, Alaska isn’t really a heck of a lot different from other northern states. I submit for your consideration a comparison of four communities, Wasilla, Fairbanks, Warroad in MN, and Fargo in ND. 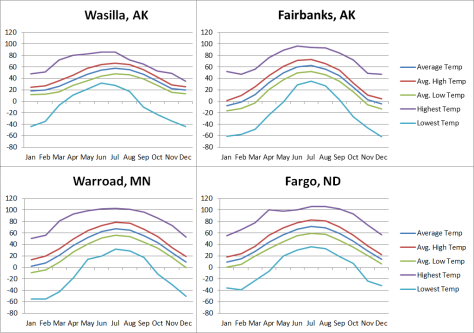 I’d like to draw your attention to the averages for January and December. Wasilla is pretty mild on average compared to all three. It’s also milder than all three in the summer time, but still above freezing 🙂 These data were sourced from (weatherbase.com – this data has some issues, but it’s generally ball-park). This graph illustrates the fact that cities deep inside a continent exposed to more extreme weather than those near the coast, even northern cities. While it’s easy to forget that Wasilla is near the coast, Anchorage is a port city and even though we’re 180 or so miles from the expansive gulf of Alaska, we still experience the moderating effect of the ocean. 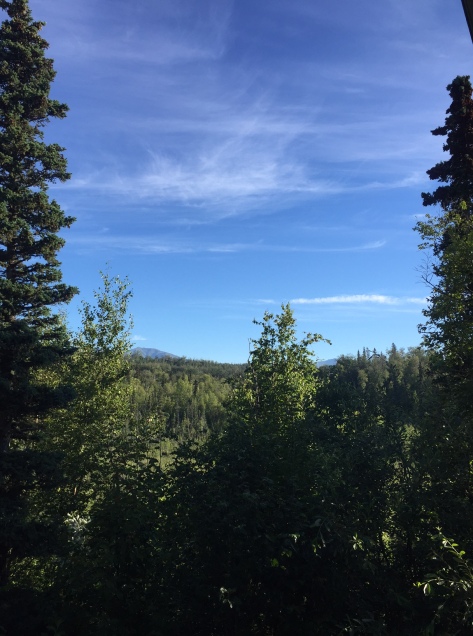 The truth is that summer is about as nice as it gets. It’s light all the time and the temperature is rarely uncomfortably hot in a way that most folks from the lower-48 would understand. The highest temperature ever recorded in Alaska was 100F in Fort Yukon. It more regularly gets into the 90s with an average of 2-4 days per year in places like Fairbanks hitting temperatures in the 90s. It’s much more common for the temperature to be a bit on the cool side. Over the weekend we (Wasilla) soaked in temperatures pushing 80F. Pretty mild by anyone else’s reckoning, however keep in mind it so infrequently reaches the 80s, that we don’t have A/C. It makes being inside the house borderline unbearable.

A typical, nice, summer day in the Anchorage/Mat-Su area is going to look like this: You’ll wake up at 6am, the sun shining, with a temperature in the low to mid 50s. The air is sweet, clean, and slightly damp. By mid-day, the sun will be beating down overhead, and you’ll feel the heat of the sun on your skin more than the hot air, which will have risen to the high 60s. When you pass into the shade, it’ll still feel cool, but not uncomfortably so. At around 5, when you’re ready to leave work, the temperature is pushing 75 and is as likely as not to continue climbing. Note, the humidity isn’t awful at this point, maybe not even notable. After dinner, the heat of the day will have peaked and started to fall. It’s still full daylight. At 10pm, after a long day, it’s still more or less full daylight, with golden light glittering through the birches, but the temperature has dropped into the 60s and it feels good, not unlike the feeling after a thunderstorm passes through to leave everything clean and cool. If you’re in Fairbanks, odds are pretty good you’ll have an afternoon thundershower as well.

Winter can be quite as bad as everyone has heard. 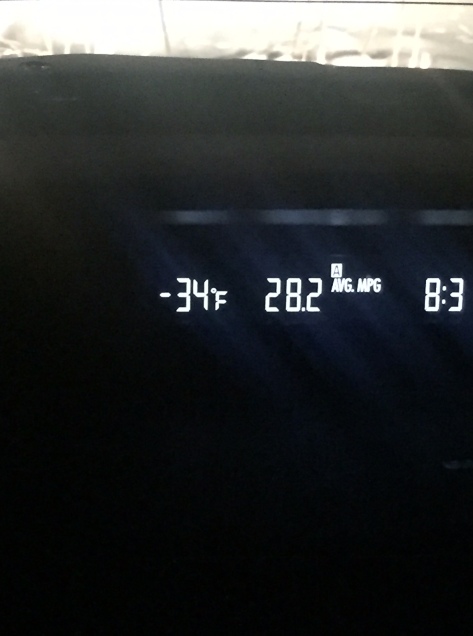 One winter, in particular, I think it was 1998/1999, or possibly the year after, when I lived in Fairbanks it did not get warmer than -20F for something six weeks straight. It was routinely around -35F that year and I believe it reached as cold as -45F or possibly pushing -50F. The truth of the matter is that anyone living in a northern US state, like Minnesota, will have experienced similar temperatures. I think the main difference is that in Fairbanks those temperatures can linger for weeks. What nobody ever tells you about those temperatures is just how fast you are robbed of heat on exiting a building. One moment you’re not particularly cold, the next, you’re frigid. The other thing is how the soles of your shoes freeze so that when you walk into a building you have to proceed with duck-footed caution for a few moments, lest your feet shoot out from underneath you. The last interesting thing to note about excessive cold is the fact that you simply can’t touch anything metal with your bare hands. I mean you can, but it’s painful. After living in Fairbanks, you become conditioned to slipping your hand into your sleeve to grasp any door handle. Even in Maryland when things got ‘cold’ I found myself grabbing perfectly warm door handles with my hand in my sleeve out of habit. In Wasilla some years, the wind can be so bad, it rips satellite dishes from their mountings on the roof and piles snow six feet deep in the driveway. I recall one particularly bad year where I pulled up to an intersection to find the signal gone, a lonely strand of wire dangling to the ground in it’s place. So, yes, winter can be a hellish experience that matches or exceeds the expectations you might have from Johnny Horton or Jack London, but it’s not all bad.

Extreme winter conditions aside, a typical winter day here in Wasilla runs like this: You wake up at 6am to dark as thick as midnight. The temperature will be somewhere in the teens or twenties, so you’ll need to start your car and let it run for ten or fifteen minutes. Of course, you’ll have to scrape the ice off windshield and if it’s snowed clear the snow from your car, possibly having to free your windshield wipers from a thick layer of ice. With luck you remembered to plug in your block-heater the night before (this is a little electric heater that attaches to the bottom of your engine block and helps prevent damage from cold-starts). The drive to work probably won’t be that bad, maybe a bit icy here and there, particularly on the starting or stopping. It’s not that big a deal though because you’ve put on your studded tires. By the time you get to work at, I dunno 9am, it’s still dark, but a thin ribbon of light just over the mountains in the east have improved the situation. When you get to lunch, it’ll have warmed up ten or so degrees and the sun will be skipping just above the southern horizon, providing only a vague warming sensation on your face. The hard part of this will be that it’s difficult to see in the glare of the snow and low-angle light. At the end of the day, sometime around 5, the light will be failing again and temperature dropping. If you’re lucky, a pineapple express will have blown in from the south and a warm-wind will be chewing away at snowbanks, leaving the roads running with a slurry of salt, sand, and water. As you drive around, every few miles will require another blast of wind shield washer fluid that clears your view, but completely fails to make any improvement in your ability to see the road because your headlights are so dirty, they’re no better than a pair of flashlights with drained batteries. 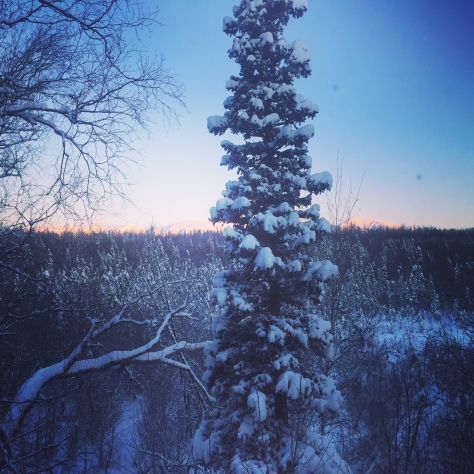 My point is that yes, it can be very cold and dark in the winter, or cold and damp in the summer, but on the whole, it’s not actually worse than any northern state, and in my opinion the summers are nice enough to make up for all but the most painful winter experiences. There is nothing at all like sitting outside under the midnight sun around a fire sipping a cold one.

Next up: Is living in Alaska Dangerous?