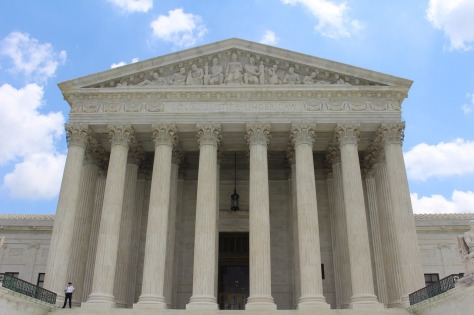 I created this blog to discuss topics of writing and my twitter account for the same. Now, I find myself breaking my platform at the risk of alienating people I respect. Coming out with a political statement may mean the end of all hopes I ever had of being published or seeing any sort of success as a writer. I expect to be trolled by conservative agents with no higher interest than shutting down the opposition. I will be panned and told to “go back to writing about faeries and frogs” or “You’re supposed to be a writer, shut your mouth,” and very possibly, “You’re just a snowflake libtard on the rag about losing the election.” Frankly, I’d rather be doing anything in the world than putting myself in the cross-hairs of ignorance, but I am doing it for them as much as me. And as much as I’d give anything to be ignoring politics and discussing my progress on those works I continue to develop even now, I feel obligated to speak out. The events on January 28th, 2017, were not just a series of protests, they resulted in a grand failure of our democracy. Even with the hope and hard work of every single soul who went out on a cold January to protest the human rights violations by our government, our democracy still failed.

Below are the contents of a letter to my senators & lone US House representative, though it’s in the senator form at the moment. As none of them will read it, I hope it reaches at least one other person and resonates.

I am writing this letter today in the wake of a profound failure of our democracy. Before you dismiss this as overreaction or hyperbole or even the ravings of a very upset partisan, I ask you to consider my thoughts on the matter, as I deem this the most serious threat to the people of this country since the Japanese attack on Pearl Harbor. Our government has three branches designed to ensure a fair system that treats everyone equally and guarantees the rights of every last resident, even if their preferred candidate failed to be elected and their policy preferences be laid aside in favor of others. To wit, this letter is not about the election or who wasn’t elected, nor is it about routine policy complaints, it is about the current state of affairs. The judiciary makes up, perhaps, the most essential pillar of our democracy. It ensures every resident a last resort stop-gap between the people and the government. Further, it ensures all government actions are carried out in accordance with the constitution. When actions are deemed to possibly infringe upon rights set forth in the constitution, the courts halt those activities until the matter can be argued by both sides.

On January 28th, 2017, this system failed. Multiple courts ruled to stay an action made by the executive branch on the grounds that it may, in fact, be unconstitutional. The executive branch directed its staff to ignore the courts, and the enforcement officers involved did. To be clear, in defiance of the constitution, the executive branch ignored a court order. This, as one of my friends described it, represents a profound constitutional crisis. While it is alarming enough when border enforcement agents ignore a court order regarding individuals who, most likely, can in fact have their right to reside and work revoked under simple administrative action, the matter becomes profoundly more disconcerting when we consider that it could easily have been, and indeed could still be, the marines facing this choice. Will they uphold the constitution or follow the commander-in-chief?

I’m fully aware that the senator will never read this note and that the senator’s interest in its contents are so minimal that I may as well have not written it in the first place. No doubt, it will be skimmed by you. Perhaps you’re a harried and overworked staffer or an intern tasked with flipping through these things to mark a spreadsheet and, if I’m very lucky, you’ll flag my note to receive an official form letter on the senator’s position. I expect the letter will read ‘we are working very hard with the trump administration to…’ or some such. However, I can see you sitting in front of your computer, wearing a tie that’s too tight, a blazer that’s usually too warm, but is nice and toasty in the winter, and a pair of slacks that, frankly, aren’t doing you any favors of the damp chill of DC in January. Perhaps I have that wrong and you’re a young woman who fussed over whether or not to wear a skirt today and debated the merits of which way might be the most comfortable to wear your hair and whether or not to bother with makeup. Maybe you’re none of those things and you’re sitting in an office in Anchorage wearing jeans and wondering what all the fuss is about, possibly even getting somewhat hot under the collar over all the protests. The point is, I see you, you are me, and if we were to speak, we would agree on a great many things and we would disagree on a great many more, but one of those things we support together is the constitution and each and every carefully crafted tenant therein. On those grounds, you and I will share belief, and in watching the events unfolding across this country over the weekend you should be terrified of the failure of our democracy right now not because of protests, but because the executive branch is setting the tone. They will not obey the laws of the land. Further, law enforcement agencies, and presumably the military, will follow suit. It’s a complete democratic failure.

So, I am writing to you too, not just the Senator who will never know my thoughts on the matter. Our democracy hasn’t yet died, it has only failed. There is still time in which we can act and salvage some semblance of a functioning country, but it has to happen soon. In the coming weeks, I will attend as many rallies and protests as I am able, even until the national guard is called in to silence dissent, peaceful though it may be. I will support those entities still committed to freedom and the rule of law in this nation, and I will communicate my position through every venue I am able. Frankly, I’d rather be watching Game of Thrones and worrying over how I’m going to lose fifteen pounds before my 20 year high-school reunion. Now, my only focus in life revolves around how I can do everything possible to ensure that my children grow up in a country where we still choose our leaders. In a country where nobody will ever be picked up and tossed in jail for the color of their skin or the religion they practice. Please. I urge you, do not allow our democracy to fail. Stand up and be heard. Support the rule of law, the court system, the senate, and above all, the constitution. Today, there are 543 people standing in between the people of this country and a military dictatorship, be one of those who stands up, who history remembers as being there at the darkest hour.